Posted by ECC on 22:18 in feature News and Events Theological Concerns | Comments : 0 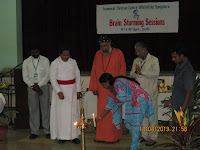 Born in the dreams of the Late Rev. Dr. M. A. Thomas, a man of God and great visionary, the Ecumenical Christian Centre marked her beginnings on January 5, 1963, at  Bangalore. What began as a mustard seed, with the vision of promoting the unity of human kind, conviction that “the great God is above and the wide world is around” and the devotion to promote and strengthen ‘the winds of change’, today, has grown and matured into a centre with 23 constituent bodies from the Roman Catholic, Orthodox, Mar Thoma and Protestant traditions and other Christian organizations. For the past 50 years, the ECC has been furthering an inclusive and democratic culture in India, fostering an ecumenical vision and consciousness to uphold the principles of justice, peace and the integrity of creation, and sensitizing the people on contemporary concerns thereby enabling them to participate in the creation of a just society.

Having travelled together in an ecumenical pilgrimage for the past 50 years, the time has come not only to thank God for the life of the great visionary, Late Rev. Dr. M. A. Thomas, but also to pray to God for newer visions and broader dreams. The time has come for us to reflect whether the ecumenism we foster is a movement or monument, dormant or active, inclusive or exclusive, encouraging or discouraging, institutional or transcendental, restricted or open, ancient or modern. It is in this context that more than 25 delegates belonging to the various constituent bodies of the Ecumenical Christian Centre gathered at the ECC, Bangalore on April 15 and 16, 2013 for a brain-storming session, with the prayer, “God of Life, pour out Your spirit upon us”.

REPORT
A.    We the participants of the ‘Brain-storming Session’ thank God
01.  For the life and witness of Late Rev. Dr. M. A. Thomas and his vision to initiate the Ecumenical Christian Centre.
02.  For the genuine efforts of all those who toiled hard ever since the inception of the ECC, especially the directors, deputy directors and the staff of the ECC, in accomplishing the vision of the Late Rev. Dr. M. A. Thomas.
03.  For the mission and ministry of the ECC over the past 50 years, serving both as a catalyst and as a training centre equipping the Church towards promoting unity, justice, peace and integrity of creation.
04.  For the commitment of the ECC to engage in discussions and dialogues on issues and challenges pertaining to the society, church, creation, economy, religion, culture and gender.
05.  For the ways in which the Almighty has guided us in the past in realizing His will and purpose for the ECC in participating in the extension of His rule.

B.     We the participants of the ‘Brain-storming Session’ recommend that the Ecumenical Christian Centre shall,
01.  Enable the Churches to affirm the Sacramentality of Creation and initiate action plans at the grassroots level, greening our daily routine as a way to practice eco-spirituality.
02.  Challenge the Churches and communities to transcend, transform and break the ‘walls’ and ‘fences’ that cause divisions in the name of religion, class, caste and gender.  Further, help the ‘Church’ in her diversity to recover her sense of oneness as the Body of Christ.
03.  Encourage the Churches to engage in a kind of ecumenism which is prophetic, radical, transcendental and liberative, expressing our solidarity with the struggles of the marginalized and embracing the ‘other’. For this, ECC should not only accomplish programmes designed in the beginning of the calendar year, but also initiate programmes as spontaneous response to particular and contextual challenges that arise from time to time.
04.  Initiate a series of programmes for the society at large, particularly for the youth, to be sensitized to the emerging contexts to find alternatives, especially in the changing scenario brought about by globalization, where economics appears to have taken a back seat and ‘financialization’ of knowledge seems to rule..
05.  Continue to uphold the Ecumenical and Christian values promoting ecumenism more at the grassroots level. Further, initiate ECC units in every state/district in order to translate the academic discourses and deliberations to the grass-roots level. Moreover, ECC shall also organize outreach programmes in partnership with various congregations and organizations.
06.  Publish documents and texts in regional languages (as well as translate) on contemporary challenges and on how to address as a community being faithful to the Gospel.  Also, evolve ways of making aware the mission and ministry of the ECC to the public, using the possibilities of the print, electronic and virtual media.
07.  Shed the ‘churchy’ and ‘inn-keeper’ image and stand up for justice, speaking out on contemporary issues, particularly on human-rights issues.
08.  Use knowledge as a weapon at a time of digital and information warfare and engage in re-defining what ‘evangelization’ means in the 21st Century Indian context.
09.  Promote liturgical ecumenism to understand, respect and learn from each others’ liturgical traditions.
10.  Partner with civil societies, peoples’ movements, earth communities and faith communities in praying together, “God of Life, Lead us to Justice and Peace”.
11.  Initiate studies on ‘virtual oikumene’, to understand the challenges of the virtual world as well as the possibilities of the virtual world in promoting unity and SHALOM.
12.  Engage more in the areas of agriculture and horticulture, interlinked with the nurturing of bio-diversity, as an expression of eco-spirituality, as well as to use it as a source to generate resources (money) to foster ecumenical ministry.
13.  Address not only urban issues but also issues that confronted by people in peri-urban and rural India, including poverty, hunger and marginalization, and equip the Church to address these issues creatively and effectively.
14.  Evolve ways of building confidence among the constituent bodies and thus encourage more people to journey along with the centre.
15.  Revitalize the efforts to foster ecumenism as ‘unity of all those who believe in Christ’ which seem to have been a little side-lined in the efforts to promote Wider Ecumenism.
16.  Document the assets and properties of the ECC so that they fall in line with the legal requirements of the government.
17.  Initiate training programmes to nurture citizens as disciplined agents of social actions, training them to engage in public governance and health interventions, particularly in the rural areas.
18.  Explore ways of utilizing the possibilities and potentials of projects initiated by the government toward empowering the poor and the down-trodden.
19.  Gather the pastors ministering in the proximity of the ECC to engage in serious studies of theological books and deliberate on theological issues, enabling us to demonstrate the ‘Rule of God’. Also hold Bible-Studies for the clergy and the lay to understand the original sitz im laben (the historical context and social contexts) of the scriptural texts as well as their relevance to the present contexts.
20.  Bring faiths together in addressing social and political issues and issues related to human-rights (violation). Also, initiate projects and programmes to address the issues faced by the migrant workers in Bangalore, who belong to different faiths, cultures, languages and states.
21.  Promote ecumenism among the children and youth, as the deposit of wisdom and creative thinkers, equipping and nurturing them to grow and live in harmony and actively engage in the process of nation building. Further, train the youth to face and succeed in the Civil Services Exams, so that we will have committed Christians, upholding ethical values, in the bureaucracy of India, who would become catalysts in the nation building.
22.  Initiate pastoral, clinical, pre-marital and stress-management counseling for the youth and young couples.
23.  Organize fellowships and mutual enriching sessions to promote inter-faith dialogue.
24.  Assure that ecumenism is not reduced to a few programmes, but should be understood and realized as the ‘essence of Christian faith’, leading us to have a deeper and candid understanding of ecumenism.
25.  Ensure discussions with actual social and ecological activists and also with the victims and survivors of various kinds of violence, so that ECC would have a comprehensible understanding on designing the future of ECC’s ecumenical mission.