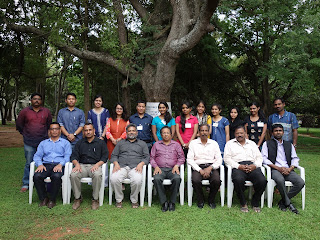 People are ignorant about the issues related to Maoism. This seminar was an eye opener for many of the participants. Fr. Chandrankunnel in his keynote address shared his experiences of working with the maoists and highlighted the issues and challenges that we are facing in the red corridor region of India. In line with the keynote address, Dr. Moses speak on The Grievances of the People in the Red Corridor Region of India: A call to voice for the voiceless. Dr. Moses highlighted the purpose of Indian nation that is democratic to ensure life, liberty and property to all citizens.  He concluded his talk by suggesting strategies to help the people at the margins on how to access human rights. Dr. Routray who serves as the Deputy Director in the National Security Council Secretariat (NSCS), Prime Minister's Office, New Delhi gave a detail on the emergence of Maoism in India and discussed the three stages of Maoism- the surge stage, the decline stage and the revival stage. According to him internal squabbles led to the movement splitting repeatedly, particularly during the first two decades of its existence.  Fr. Jerry highlighted the media and its usage by the Maoists. He concluded his talk by stating the emerging trends of Naxal movement is moving towards young and urban crowd from Rural region through the influence of media. In the next session, Dr. Nalini shared her experiences of working with the terroists involved in the Bangalore blast. She talked about the psychological causes of antisocial behaviour. She has rightly pointed out that, “one person’s terrorist is another person’s freedom fighter.” It is probable that Maoist struggle in India is also based on that principle. The next session was with Mr. TSS Mani, a social activist. The talk was very informative in spreading light on various dimensions of the red corridor issues such as economical, political and historical aspect of Maoism. He focussed the neo-liberalization, globalization and semi-colonialization that has brought both positive and negative effects on the Indian society.  In the final session Dr. Boas gave a theological reflection. He concluded his reflection by saying, “spiritual satisfaction can be attained only by responding to the real problem.” The seminar ends with the presentation of the draft by drafting committee (Mr. Newton, Ms. Ida Jenefa, Rev. Iniyan and Ms. Bhawani) and with  the concluding remarks from the Director, Very Rev. Cherian Thomas.
Environmental Justice: Issues and Challenges (July 5-7, 2016) 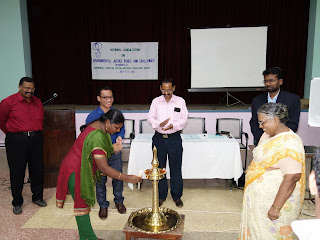 The National consultation on “Environmental Justice: Issues and Challenges” was held at Ecumenical Christian Centre, Whitefield, Bangalore during 5-7, July, 2016. Rev. Sudhakar Joshua, the Deputy Director of ECC inaugurate the consultation. Prof. Dr. Rajan Varghese, a founding Director and Principal of the Marthoma College of Management and Technology delivered the keynote address. He expounded the theme from various perspectives and clarified some of the traditional approaches which lead to the destruction of Environment.

Dr. Beulah Herbert Samuel took the first session on Women and Environmental Justice. She emphasised human stewardship towards Environment, affirmed the significance of Environmental Justice, and elucidated the impact of Environmental injustice on women. Rev. Christy Gnanadasan took a session on the Impact of Environmental Degradation on Dalits and Tribals. He clarified that human beings are not custodians of the environment but co-exist with nature. Dr. Rajan Varghese took a session on Global Equity and National Responsibility, in which he discussed the Global initiatives for Sustainable development and India’s share in the Millennium Goals.  Fr. Jerry Kurian a prominent scholar in the field of communication took a session on Role of Media on Environmental Justice. After he deliberately discussed on the role of media on environmental justice, Fr. Jerry concluded the talk with a challenge that, not only media, every individual has a responsibility to educate and make people aware of this pertinent issue. Mr. Pravir Bragodia who took great initiatives for eco-friendly living took a session on Green Living. He displayed the ill effects and wide varieties of pollution on the environment. He summed up his lecture by advising all the participants to follow the golden rule of Green living which is Reduce, Reuse and Recycle. Rev. Dr. John Samuel took a session on Eco Linguistics. The participants were very much impressed by the presentation and the way how he  explained the extinction of languages in the process of Ecological crisis. A session on Ecology: Some Challenges was taken by Very Rev. Dr. Cherian Thomas, the Director of ECC. Dr. Cherian explored the Earth centered interpretation of the Scripture, and encouraged participants to develop a bio-centric attitude to facilitate Environmental Justice. At the end the delegates were divided into four groups, and Dr. Cherian suggested them to discuss on the possibilities of implementing Environmental Justice at their own areas and level. They had come up with resolutions like, practicing eco-friendly way of living; educating the churches and general public on this pertinent issues by conducting more seminars and organizing various activies like rallies, essay writing competitions, painting, etc. The final session was on, Climate Change and Our Response by Prof. Dr. R. Rajagopalan. He brought out the facts and figures of Climate change during the centuries. His lecture focused on the change of inner consciousness of human beings as the remedy. Thereby, he urged all the participants to join the movements on Environmental Justice.

The consultation concluded in a solemn manner where the Director, Very Rev. Dr. Cherian Thomas after giving a concluding remarks called the delegates to stand and sing, “We Shall Overcome” in unison, which was followed by prayer and benediction.

A brief report of Institute on Politics, 2016. 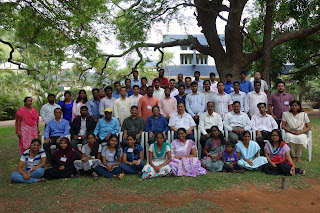 The programme department of Ecumenical Christian Centre (ECC), Bangalore and Inter-Church Service Association (ICSA), Chennai jointly organized Institute on Politics, 2016 during May, 2-6, 2016, with the theme “Analysis of the Contemporary Political Challenges in India.” About 44 participants from different parts of the country participated the Institute. A brief introduction about the Institute on Politics was given by Dr. Reji Samuel, Dean of ISET, ECC, followed by the key note address by Very Rev. Dr. Cherian Thomas, the Director of ECC.

Dr. A. J. Anandan, IPS (Rtd.) took the first session, Analysis of Contemporary Political Challenges in India. He stressed on the political challenges that India is now facing. The next session was on Understanding Politics by Dr. Moses P. Manohar, the Executive Director of ICSA. Dr. Moses dealt with the very basic question, “what is Politics and its importance and need in our society.” Shri. N. B. Bhat, IPS (Rtd.) took  a session on RTI & Fixing Accountability. Bhat threw light on various aspects of RTI, why it was enacted, its features and relevance. Dr. Moses P. Manohar took another session on Introduction to constitution of India. He briefed the history and development of the Indian constitution and its principles. Dr. Moses continued his talk in the next session on the need of the state and the ideas of the Welfare State. Another eminent scholar Dr. Sapna Mohan took two sessions, Women and Law and Recent Legislations in Central and State/budget allocation. Dr. Sapna discussed elaborately on the laws and legislation in India that dealt particularly with the rights and protection of women. Great personalities like Justice Santhosh Hedge, the former Supreme Court Judge also took a session on Lokpal Bill/Lokayuktha. He discussed in details about the role of Lokayuktha and challenged the young people to bring change in the society by keeping themselves aloof from the Greed and to promote the values of Humanism. Mr. Tarak Goradia, an IIT graduate and a worker of AAP also took an interesting session on New Political Experimenting, where he discussed the primary objectives of AAP and its function, and their aim of establishing a new kind of democratic structure and principles. The session was followed by Human Rights Issues by Mr. Mathew Philip. He alleged that Human Rights is the integral part of Politics and protection of the Human Rights is the primary objective of politics. The final session was on Spirituality and Politics by Very Rev. Dr. Cherian Thomas, the Director of ECC. Dr. Cherian gave a wider meaning of spirituality and invited the delegates to protect and preserve the human rights which are sacred. He strongly urged the delegates to be a part of nation building which is the true sign of spirituality. The session ended with the brief report of the program.

Cordially invites you to the Twenty third

Topic:   ‘Challenges to Plural and Secular ’

A vehicle from the city to the Centre will leave